Something else from the 'to be completed' bag 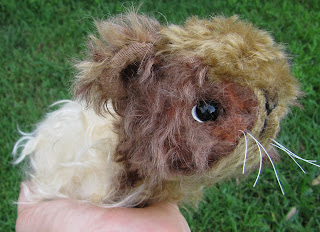 Little Maximus here is another creation found at the bottom of my 'to be completed' bag of creatures. He was completely cut out, pinned together and half sewn, so I finished him off and decided to do his face a little differently (especially as there wasn't any scope to change his pattern like I've been meaning to at this stage!). So I gave him a slightly more Anime/cartoon look with his high-set nose and beady little eyes. He's also the first guinea pig to have whiskers - which kind of makes him look a little cat-like! :P 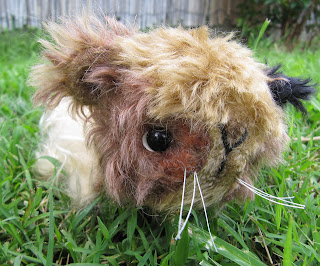 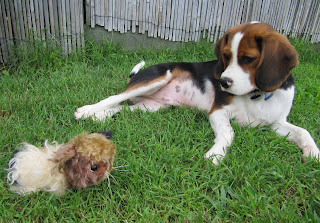 We got a brief moment of no rain this afternoon for me to take photos. Not exactly clear skys, but enough sun to get decent photos! Oliver was SOOOO excited to have someone in the backyard that he was rather difficult to control. Eventually he got the message that I was busy, and he backed off. And he didn't try to snatch Maximus once! (must be all the training I've been putting into his not snatching Chelsea's toys - mind you, that's still a bit of a battleground! If he thinks no one is watching he'll still quite happily sneak inside, grab whatever she's left lying closest to the door way and run to the far corner of the yard to munch on it. Usually resulting in the destruction of that particular toy, or the need for it to have a very good soaking/machine wash!).


It wasn't all discipline for poor Oliver though. We played fetch half a dozen times till he decided that wasn't doing it for him any more and went off to make his own fun! And here I was feeling all guilty that we weren't spending enough time with him... ! :P
Posted by EmmasBears at 4:29 PM