39 weeks pregnant, the ever expanding belly and cabbage patch dolls 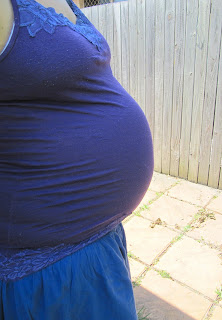 You've probably noticed on my little ticker thing on the left hand side that I'm 39 weeks this week. I was quietly hoping I wouldn't make it this far, that bub might have decided to come a little earlier for me. But it doesn't look like it will be the case. Chelsea was late, so he might be following in his big sister's footsteps. 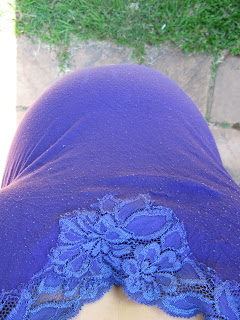 These are some quick belly shots I grabbed this morning - this one is what I see when I look down! I feel like it is so big now that it's getting to the comical stage. I keep bumping into doorways with it, or knocking things down. Or (as happened at the shops yesterday), if I think too much about it and overcompensate for the belly, I just end up bumping things with my ever expanding buttocks!

No bearmaking has been done since Jindalee. I think I might have used the last of my energy reserves on her. Sewing up her seams was quite a challenge as well with all that fur and leather. So instead of cutting out and sewing bears during Chelsea's sleeps over the last few days, I've been trawling the internet for cabbage patch dolls!

For those of you who know me (or who have been reading this post long enough), you'll know that my interest/attention span is quickly taken up with a new idea, that I then have to exhaust, before moving on to the next idea. This manifests itself in new patterns that I never quite perfect, new techniques that I try a handful of times then move on from, a new fabric that I just have to have, that gets pushed aside by the time it arrives... :P

With the cabbage patch dolls it is because of this photo: 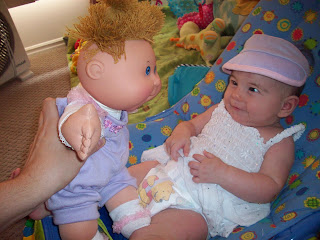 Chelsea is about 3 months old here, and this is her first introduction to a baby doll - my cabbage patch doll that Mark had bought for me some Christmas prior. (I went
through a brief cabbage patch obsession back then too). She still loves this doll, and demands that I undress it all the way down to its tiny nappy so we can poke it's belly button and count it's toes, then dress it back up again! She has lots of dolls, and doesn't really 'need' another one, but as is the way of my obsessions, I've decided that she does. And it needs to be a cabbage patch. Preferably a boy (so she can have her own baby when bub no. 2 arrives).

But you wouldn't guess how ridiculously hard they are to find!!! I've been to just about every department and toy story in the area and there are just none to be seen. One shop had half a dozen collector girl dolls at exorbitant prices, but not what I wanted. I've tried about 2 dozen online toys stores, ebay, gumtree - even etsy (don't know what I was expecting to find there though - there were lots of gorgeous handmade clothes for cabbage patch babies... :P)

In the end I bit the bullet and purchased a cabbage patch 'surprise newborn' from an online toy boutique. The question now will be who will arrive first - bub no. 2 or the cabbage patch baby!? 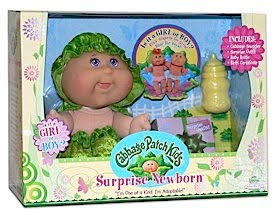