I have been wanting to take Chelsea to the zoo for ages!!! But with the weather so bad we had put it off and put it off. But today was Mark's last full day at home with us before he has to go back to work, and before baby comes. So we bit the bullet and went anyway!

When we drove in the gate there was a big sign warning that the zoo was very muddy, and the lady we purchased our entrance tickets from explained that it had actually been closed for two days last week due to the lake surrounding 'Lemur Island' flooding right up to the back of the cafe! We were unperturbed! 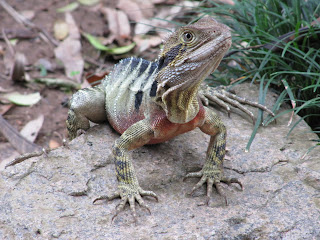 I think (again) that Mark and I got more enjoyment out of it than Chelsea did. We saw sun bears and marmosets, red pandas and camels... plus all the usual Aussie animals - wallabies, kangaroos, emus, cassowaries, frill neck lizards at every turn! 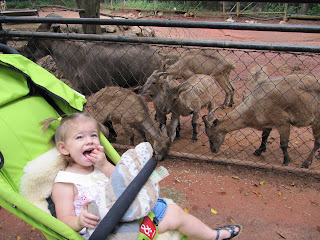 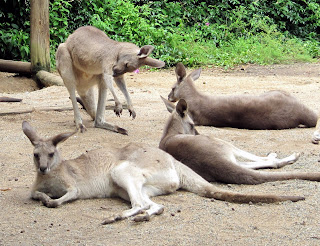 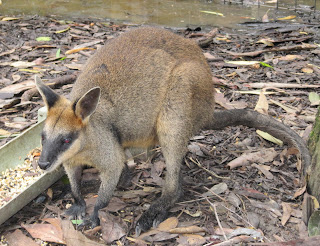 This Koala looked like he was sick of the weather too! 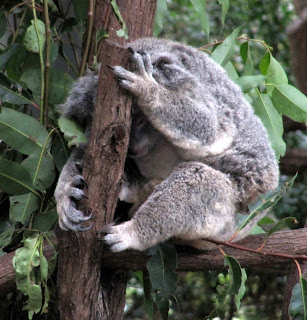 It started to rain a little heavier at one point so we took refuge at the farm animals display. This was the only time Chelsea cried. The sheep was baa-ing very loudly as they could see we had the little packets of food, and I think it scared her a bit. After she settled down we patted some alpacas and feed a very large and very friendly cow. The sheep were a little too enthusiastic though, so I fed them myself. They were clambering over each other to get to the food. I laughed to Mark and said that at the rate they were going they'd climb out of their enclosure... and sure enough the biggest one got out! We're not sure what happened after that as a new group of people arrived for the sheep to pester for food!

My favourite animal of the day, and probably one of the least exotic, was the donkey! He was very friendly, and even though the sign said not to feed him as he wasn't well, he still came right up to us and said hello. 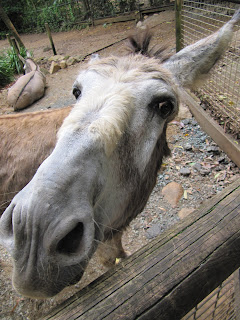 Posted by EmmasBears at 8:43 PM