Normally i don't pay much attention to School holidays. Mainly because i don't do the school run yet, and am not driving in morning school traffic to get to work. But this time I am very aware that it's school holiday!

We have my 8 year old sister staying with us for the next few nights. My mum and step dad are taking a well deserved kid free break. Lilly came to stay with us. 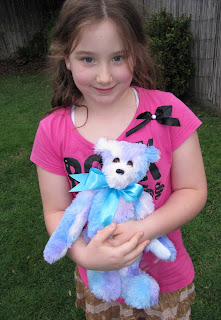 She has been an incredible help with Chels. And i get the feeling Chelsea is really going to miss her when she goes. We decided to fill in some of the time while Chelsea has her day naps making a bear. Lilly chose the fabric. Drew out the pattern herself. Cut some of it out herself. Pinned some herself. Sewed some herself ( on the machine and by hand). Did some of the joints herself. Helped me set the eyes. Sewed most of the nose herself. Did ALL the stuffing herself. And ALL the seam closures as well. She has blown me away! She called her bear Violet. 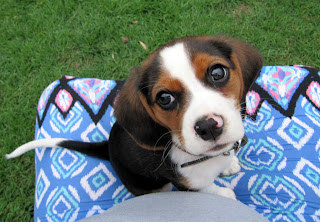 Also - thought I'd throw in another photo of Oliver. He's 11 weeks old today. And you can really see that his nose is starting to blacken compared to his earlier photos! He's heaps bigger too, but thats probably hard to tell in a photo. (also - check out the pregnant belly sneaking into the shot! )
Posted by EmmasBears at 9:13 PM