Today was a lot better. Thanks to everyone for your support. I totally didn't expect that, and it made me feel a lot lighter about the whole experience of moving house.

It rained all day, which made moving stuff a little tricky. But we still got a fair bit done. First thing this morning we headed off to meet and collect our puppy. So that was a nice start to the day. I must say, as excited as I was about meeting him, I was really anxious about how I'd manage keeping an eye on him, toilet training him, keeping him safe from Chels, watching Chelsea, feeding Chelsea, feeding puppy, helping organise boxes to be moved, organising having two of my brothers around helping move things and fix the house up a bit along with a bit of last minute packing... but I did it! I am so proud of myself. And we didn't have one puppy toileting accident! 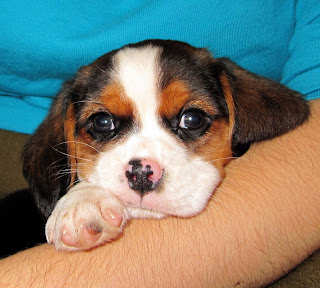 We've called him Oliver. And he's a real sweetheart. He was one of the more placid of the puppies from his litter, and had spent the day just following us around, and playing with Chels. He loves following her like a shadow and trying to grab hold of her nappy. She thinks it's hilarious, and they both come running to my lap and launch themselves onto it in a pile of baby-puppy giggles!

He's currently sleeping in his little puppy carrier with his padded bed squished inside so its nice and cozy. He actually goes in there willingly too which is awesome. I wasn't sure if he'd like it. Lets hope we have a good night with him now!
Posted by EmmasBears at 8:07 PM