Our friday the 13th adventure

It's Friday here today. Friday the 13th. As I am sure it is for many people right now, or at least it will be shortly depending on your time-zone.

Anyways - Chelsea decided that she wanted to be extra painful this morning. I was trying to do the washing up, put loads of washing on the line, and pack some more boxes for moving, yet no matter what I distracted her with - it just wasn't cutting it! 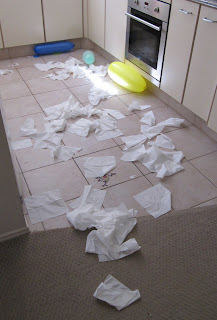 So after sacrificing a perfectly good box of tissues for 3mins of washing-up time (she likes to pull each tissue out one by one and scatter them around the house), I decided we both needed to get out of the house. 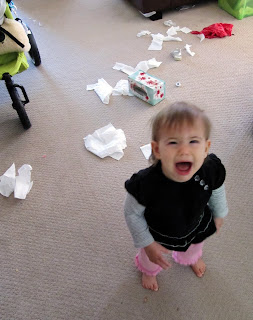 So we drove the 5mins down to the local waterfront, got some fish and chips, and sat by the playground to eat. Chelsea made some friends with the 'bigger girls' (maybe 2-3years old) and happily followed them around. And a little 2 year old boy called Jacob took a liking to her too and tried to make her play with him - she wasn't really interested though. After half a dozen attempts at escaping from the playground in the direction of the road, Chels got bundled back into her pram and we walked down to the water.

It looked so beautiful. 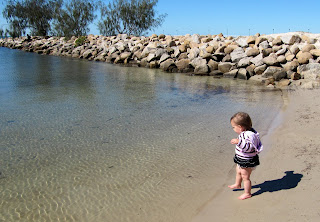 I let Chels out, and took off her pants (thinking that i didn't want them sandy), and let her toddle through the sand. Stupidly I didn't foresee the fact that she'd be drawn to the waters edge - not just walk on the sand near it. This was ok - until she sat herself down in the FREEZING cold water! 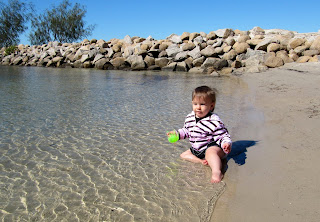 After a particularly enthusiastic lunge, she was completely soaked. She didn't like this. Neither did I! I had only bought my handbag with one spare nappy - no extra clothes. And she was clinging to me like an icy, drowned koala bear!

With a bit of quick thinking, I stripped off the soaked clothing and nappy. Dried her off with my skirt. Put the clean nappy on. Took off my long sleve shirt (i had a singlet shirt on under it - so no nudity from me!) and wrapped that around her. Put her pants back on, stripped the lambskin I had lining the pram out, wrapped it around her torso, and strapped her back into the pram. She looked a little odd, but it seemed to do the trick. 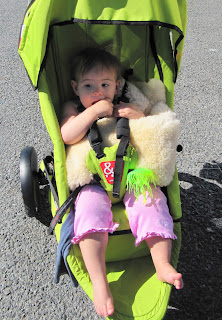 Then we had to make the rather embarrassing walk back to the car! Both terribly inappropriately dressed for the middle of winter! :P

At least the car was nice and warm!
Posted by EmmasBears at 2:27 PM