Earlier this week I purchased some really sweet handmade dolls outfits from the display of goods the local craft group had for sale at the shopping centre. There were some amazing quilts and baby clothes and incredibly inventive stuffed toys... I could have gone crazy buying up things! But I limited myself to two outfits. One was a tiny pair of hot-pink doll's overalls, and the other a sweet dress and bloomers set. They are both so well made and even include some amazingly neat and tiny hand stitching! I really don't think they charged enough for the time that would have gone into them! 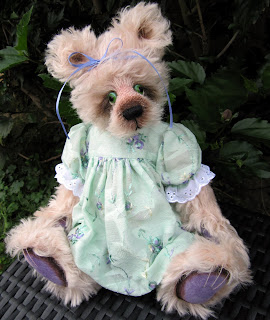 Tuesday I sat down and tweaked some of my existing patterns to make them work for the size/shape of the outfits. Gracie is the bear I built to fit the dress and pants set. They fit her so well you'd think the clothes had been made for her - not the other way round! 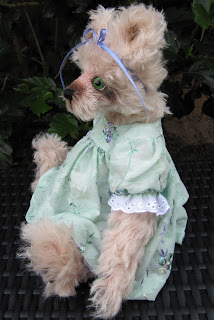 I used some of the design points I learn from playing around with Booth and Acorn's patterns last week to give Gracie's pattern a more girlish shaped head. The bear I made from this pattern originally was called Totole - and had quite a different look. I also knew I wanted Gracie to have fluffy cheeks, and know that sometimes my bears looks more boyish with facial hair - so tried my hardest to get her looking like a lady. 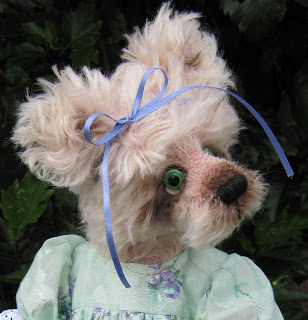 I think she does... just a grumpy lady! And her eyes were a bit of a pain in the rear end as well. They are handmade glass eyes, in the exact colours to match the dress, so I really wanted to use them. Being handmade though, the pupils aren't exactly centred, which leads to a slightly squinted look from Gracie. Its definitely not as bad as some of the other bears I've tried to make with these eyes... but enough to annoy me. After many attempts at re-setting the eyes and placing them differently, this was as good as they were getting! I think it actually gives her a bit more of a comical look as well! 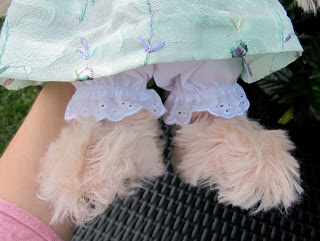 So, as I promised on facebook, I will be offering Gracie's pattern as a free PDF download for anyone interested in having a go at making an Emma's Bears bear. Its a pretty simple pattern with nice shape, so should be suitable for most levels of experience. I hope to have the pattern available in the next 24hrs or so. So stay tuned! 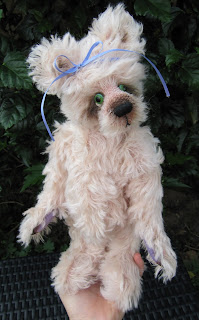 Posted by EmmasBears at 9:47 AM