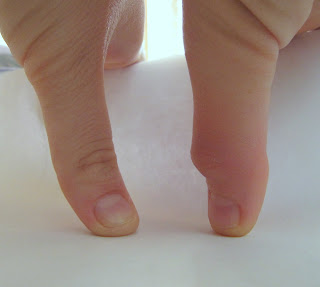 ... yes, I have injured my dominant hand. My right thumb to be exact. (to get this photo, I had to balance the camera in front of me on the desk, hold a paintbrush in my mouth and use it to press down the button to capture the image!)

It was a beautiful day yesterday, so I took Chelsea out to the backyard to have a play. While we were out there I though I might as well do a bit of much needed weeding. After tugging out a particularly stubborn weed, my hand flung into our overgrown rose bush, and a thorn got wedged deep in my thumb. I pulled it out and didn't think anything else of it (apart from the fact that it hurt - a lot!).

3 hours later my thumb was so swollen and sore that I couldn't even bend it. I called the health line for some advice and was told that due to the potential for bacteria and tetanus, and due to the fact that it had swollen so much, I should go to the nearest emergency room asap.

It all seemed so bizarre - all from a stupid rose thorn! So I dragged Chelsea off to our local hospital, explained what had happened (feeling very pathetic showing them my thumb while sick kids and people with more serious injuries were waiting). After about 45mins of waiting I went through, and was given a tetanus booster shot - just in case. They seemed to think it looked ok - but said to keep an eye on it, as it could still get infected, and with the injury being in the joint there was a real possibility of bone infection (woo hoo :P).

Today it's still really puffed up. That hasn't changed. But it doesn't seem as sore. (either that or I've just gotten used to it now!). But it just means that simple things like screwing and unscrewing Chelsea's bottles is nearly impossible. Doing up her buttons is ridiculously hard. Sewing bears is just not even going to happen! Even driving was a bit tricky.

So be warned - rose bushes are dangerous!
Posted by EmmasBears at 10:32 AM