I still have those three sweet little bears I promised to make way back here sitting in pieces on the couch beside me, waiting patiently to be sewn. Every time I look at them there it is a constant reminder of how sidetracked I've been with the guinea pigs over the last few weeks. I do plan to sew them tomorrow however. Which should mean more gorgeous bear photos in a few days time.

In the meantime, I have some kid update photos for you. Byron will be 12 weeks old in a few days! Holy Moly! Where did those 12 weeks go?? He's such a content little guy. He actually fell asleep in his rocker chair this morning (after Chelsea turned the rocking motion up to max) while Mark and I were running around trying to clean the place up before family visited. Byron just sits back and watches us all. I think it's a really good indication of the person he's going to become. (at this age Chelsea would NEVER have fallen asleep like that! She's a little more highly strung...) 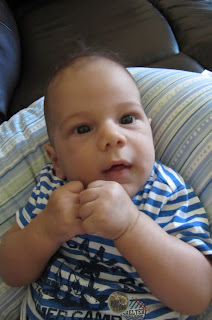 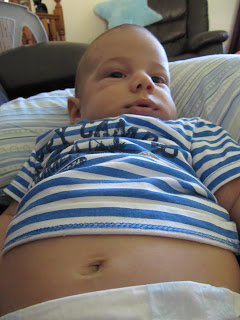 Chelsea got her first haircut last week. I had built it up in my mind as something that was going to be really difficult. But Chelsea was perfect - sat really still and was very calm. And Byron was perfect - sat in his pram and 'cooed' at his toys!

They gave me a little pink bag with a curl they'd cut off as a keepsake. I thought that was a nice touch. 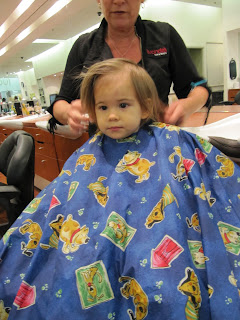 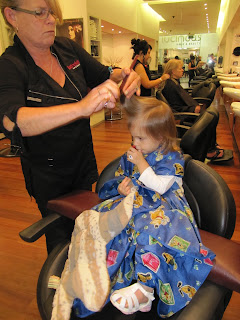 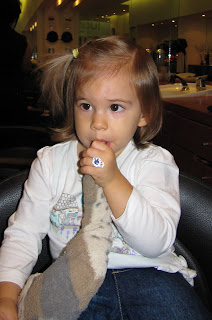 Oh, and if you've visited this blog in the last few hours you may have noticed it was changing colour/layout every few minutes. I appologise for that. I decided to brighten things up a bit, and tried in vain to find a nice blog template to download, but nothing was quite right. So I've taken the boring standard option... which is also exactly the same as my guinea pig blog... but it will do for now. (Until I either get really lucky and find a nice, easily accessed template, or get more computer savy and work out the beautiful complicated ones!)
Posted by EmmasBears at 9:34 PM