After having such a blast making those strange little bears from the post below this one, I decided to try an idea that has been rattling around in my head for a while. I like the strange bears from the bear army, but they just felt a little 'raw' to me, some more than others. But, being experimental, I think that's to be expected. And it does add to the charm/strangeness!

The idea I've been wanting to try is something I saw on a blog many months ago. It was a stunning cotton rabbit with incredibly expressive large eyes that seemed to be coming seamlessly out of the face - like they grew there! I couldn't see any eyelid stitching or anything. The eyes were set into the head and appeared to be popping out from under the fabric, yet sitting on top of the fabric at the same time. (very hard to describe, and even harder to figure out how to achieve!). So, after nutting over the dilemma of how the artist was able to do this, I think I might have worked out a method that works for me.

I've enlarged my 'Byron's Bear' pattern slightly, and cut two pieces of fabric for the front part of the flat face, one in mohair, one in a plain non-stretch fabric. I sewed these together around the edges. I marked where I wanted the eyes to sit, then cut a slit in the mohair only. I folded back the mohair to give a slight opening, made a tiny hole in the backing fabric, inserted the safety eye into the backing fabric and slipped it slightly under the piece of mohair I had folded back. This gives the appearance of eyelids without having to sew them on separately. 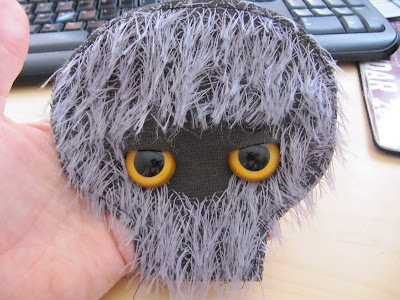 I ended up using a bit of glue to hold the folded over section in place, but the backing safety clasp seems to have done the rest (I really hate using glue on bears, but I think for this technique it is unavoidable). This is what the eyes look like. A little 'angry' I will admit, but I think that is all about the slant of the eye lids. If I try this again I'll make the cut angling diagonally downwards to give a softer look. I'm not real sure what's going to happen when I sew the back of the head on, and I'm not real sure how I could transfer this technique to 'normal' bear heads without the eyes facing sideways - but only further experimentation will tell! :P 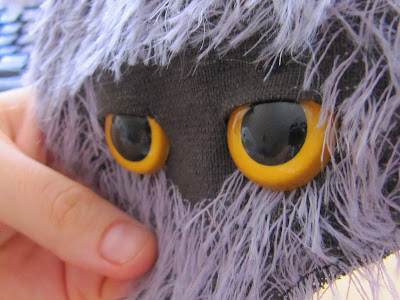 Posted by EmmasBears at 1:29 PM