Mr Byron turned 8 weeks old this morning. He's growing up so fast! An he is such a good little baby. I have to try not to take him for granted as he really does just 'fit in' with our crazy household.

He was a little more unsettled today though. The poor little mite had his immunisations this morning, which meant he had to be woken from a lovely sleep in my arms he'd has for the 45mins they kept us in the waiting room, to being striped down, weighed, measured, jabbed (twice) and fed what I'm assuming was a nasty-tasting concoction of rota virus vaccine (he screamed as much for that as he did for the needles!).

It looks like he's still got a little jaundice as well, which is odd for a baby his age. So that meant we had to go to the blood collection centre, where his heal was pricked and squeezed for a good 15mins in the dark, (apparently the light can affect the result) while they took drop after tiny drop of blood until they had half a ml! By this stage his screaming was really manic. And before they'd even had a chance to bandage his foot, he'd fallen asleep in my arms out of sheer exhaustion.

So tonight was a little tricky as he was so so sad. I've never heard a cry so pitiful. He went to sleep really well though, so I'm hoping that's a good sign for the rest of the night! This is my treat for having to get up to him at night - this gorgeous little face staring back at me while we do super quick midnight nappy changes! 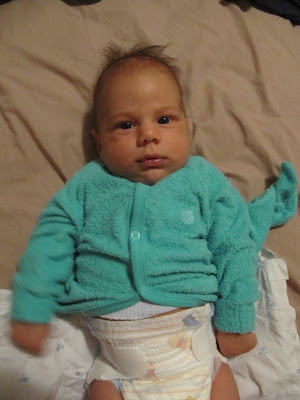 On the positive side though, he now weighs over 7kg, has grown to 60cm and is almost off the charts! He's my little chubby bubby :)
Posted by EmmasBears at 8:28 PM