Just under a year ago, shortly after I had started this blog, I posted an update about an awesome surprise package that arrived from a very generous customer for Miss Chelsea.

This week we got another one! (we have actually had quite a few in the months between then and now, but I got a bit slack with photographing everything!). 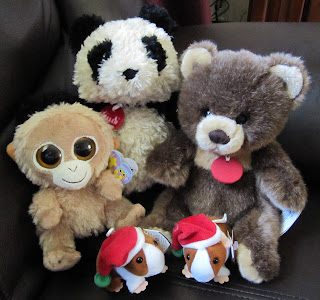 Monday morning the postie dropped off the package which contained ALL of these little critters! The monkey with the big eyes was for Mark - but has been claimed by Byron (he was fixated on it's eyes when we showed it to him), the Panda was for Chelsea (but I would have liked to steal it!), the grizzly bear was for Byron, and now sits in his cot keeping watch over him, and the two guinea pigs have been claimed by Chelsea, and now get pushed around in her pram! 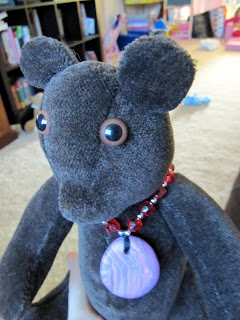 And then there was this guy! Isn't he lovely. Completely handmade by a fellow estyian Plombagine, with a handmade necklace and pendant by the parcel-sending Julie as well!

I was explaining to Miss Julie that I have been thinking about setting up a Toy Voyager account on Byron's behalf, and possibly using one of these critters to be the traveller. When I was pregnant with Chelsea I set up a postcrossing account (where you send postcards to other member all over the world and get random postcards in return). I asked the members to write name suggestions for me, and now have an album full of hundreds of cards with all manner of interesting names from heaps of different places for Chelsea to look through when she is older. (no one suggested the name Chelsea though :P)

I didn't really get a chance to do this for Byron, so I was thinking the Toy Voyager could be his thing. That way he can look back on all the photos and adventures of his toy, and maybe one day visit those places himself when he's all grown up!

My only dilemma now is whether to just send a commercial toy (less effort required on my behalf!) or make one especially for the task...??
Posted by EmmasBears at 12:26 PM