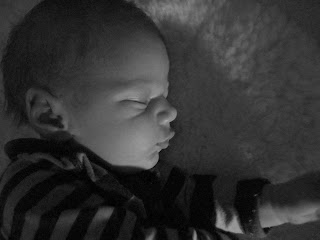 For lack of anything bear related to post about today, I decided to share some more photos of Byron. (I have a feeling that for the next little while the bears are going to have to compete with the baby for blog 'air time'!)

Byron is now just over two weeks old. I took him to have his hearing checked at the hospital yesterday, as he failed the first test they did (in a rush) before we were discharged. After waiting two hours, the test only took 5mins and he passed with no worries. But I knew he could hear! When Chelsea cries he stops and turns his head towards her. When Mark sneezes, he flinches. And he sleeps much more soundly if I leave the pedestal fan on in the room for background noise...

It was weird being back there again. All the pregnant ladies were sitting in the same waiting room I used to sit in looking very hot and sorry for themselves. A tiny premmie baby arrived in one of those huge humidicrib set ups accompanied by 4 paramedics and a flustered new mum. And a tired looking woman emerged from the birth suite, pushing her brand new baby girl in one of those clear plastic cribs on the way back to the maternity ward. I watched her shuffling along with the catheter collection tube and bag swinging precariously by her legs and thought how bizarre it is that I was walking that exact same hall just 16 days ago! It feels like so much longer, and somehow like it was yesterday all at the same time! 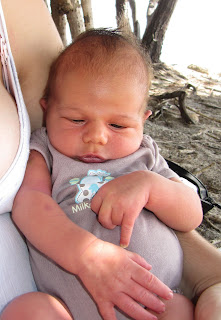 Mark goes back to work on tuesday next week, so I am a little anxious about that. If it was just me and Byron - I'd have no concerns about being able to care for him. Likewise for just me and Chels. But me, Byron AND Chelsea... that's a whole other story! But who knows, maybe she'll surprise me and be really helpful when its just the three of us... fingers crossed!

(oh, and I don't know if you can see that little bruise on Byron's arm in the photo above - just near the inside of his elbow closest to my body? click on the photo to make it bigger if you like. That is actually a self-inflicted injury! Not a Chelsea one, as I'm sure you thought I was going to say. He was looking for something to suck on yesterday when I took the two of them to playgroup, and before I knew it he'd given himself a hickey! Funny little guy.)
Posted by EmmasBears at 11:45 AM