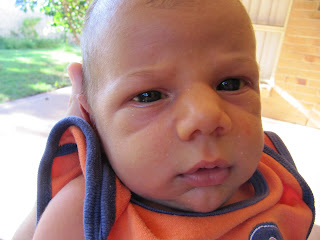 The not-so-little Byron is now three weeks old! Chelsea and I ventured out to the local chemist to get him weighed (our first trip out, just the three of us!). Chelsea was so well behaved too. We had to wait a good 10mins in line to see the midwife, but Chels just sat in her pram and waited. Byron on the other hand was not so obliging, having screamed the whole way there in the car. 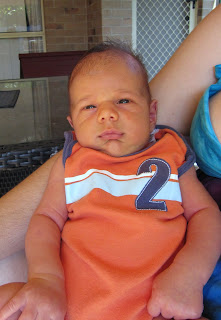 The midwife actually weighed and measured him twice, just to make sure she wasn't mistaken - but Byron has actually packed on 700g since birth - now weighing a whooping 5.1kg (11 lb, 4oz). For comparison sake, Chelsea weighed this much when she was two months old! And his head has grown an extra 4cm since birth as well. I had been thinking it was looking a little bigger too. I'm glad he chose to grow his head this much AFTER he came out! :P 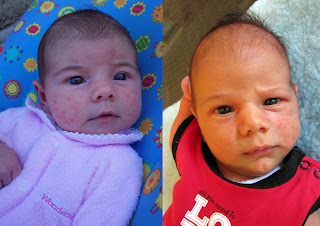 (and how cool is this photo comparison - it shows Chels at 23 days old - complete with spotty outbreak, and Byron today at 22 days old, also with spots!)
Posted by EmmasBears at 12:30 PM