Taking some time out

It has been one crazy week! I will never be moving house with a 13month old, a 7 week old puppy and being 4 months pregnant again! (at least I can't think of a possibility when that might happen again!).

After we got over the initial shock of having to move into a less than clean house, we started noticing other less than perfect things. I won't go into detail - but basically over the last week we've had just about every trades-person imaginable out to our house, and have quotes for work needed to be done that add up to well over $10,000! I think there is something to be said for building and moving into a new house! :P 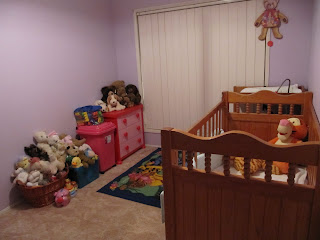 I've also got one room fully completed - Chelsea's room. It was even painted purple already which was a bonus. 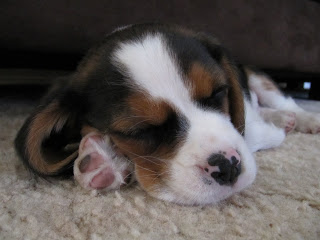 But today I'm taking a break from all that. I've tried to get back into a semi-normal routine with Chelsea. So this morning we did our weekly grocery shop, had lunch on the back patio and played with Oliver. She is having her afternoon nap right now, and Oliver is asleep by my feet.

We've had some good days and some bad days with Oliver and his toilet training/teething. He hasn't done a poo in the house in a few days now, and tends to take himself outside when he needs to go. I still feel like i have to watch him like a hawk though - the last few inside-poo's were done right next to Chelsea's toy box which was not a nice find. Oh, and his sleeping at night is amazing. No crying at all. He sleeps in his little bed in the garage all by himself and we don't hear a peep from him!

He and Chelsea get along for the most part - but they too have their moments. Oliver, being 7 weeks old, is very enthusiastic (and bitey!) and likes to chase Chelsea and nip at her feet and bottom! Luckily her nappy gives her bottom some padding, but her poor little feet have been nibbled on quite a bit! She cries and pushes Oliver away, which just seems to make him more excited! He's responding more to my voice now when i tell him no. But sometimes he needs rescuing from Chelsea! This morning she tried to pick him up by his tail! Lets just call this training for baby number two!
Posted by EmmasBears at 1:50 PM