The latest beary addition to our household

Meet Kaspar - the latest bear to come out of the Emma's Bears studio (which is really just my lounge room ;)). 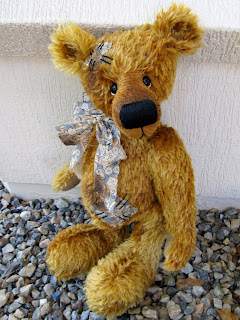 I think there might be something special about Kaspar. Miss Chelsea loved him from the moment he was just a piece of fur! I pulled it out of my already packed up craft box (I was very organised and got all my crafting stuff packed away for our big move - then decided I still wanted to make bears while we moved - so had to un-do some of my work!), and as soon as Chelsea spotted it she held it to her face, like she does with everything soft. I gently took it off her and explained that it wasn't very soft! (mohair isn't very soft - and this particular pile is a tufted texture - so extra not-soft!).

Then after I had just stuffed his head, and he still had no eyes, nose or ears - Chelsea claimed him again. Holding him to her face and running off with him! 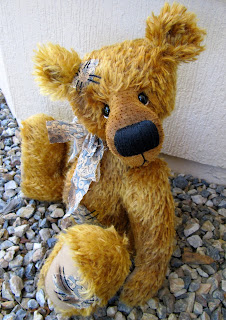 At each stage of his completion she had to give her approval. Which for Chelsea comes in the form of a cuddle. I did some work on him while she had her sleep this morning, and when she woke I had him sitting on the couch. She giggled when she saw him, and dragged him into her lap by his ear (luckily I foresaw that he may have to contend with her lack of gentleness, so he has very securely sewn ears!). She gave him a few pats, then seemed content to leave him alone.

I really wish she could talk sometimes, just to tell me what is going on in that little head of hers! 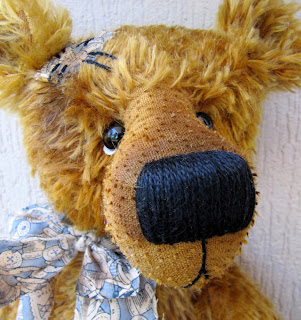 So Kaspar is finally done. And Chelsea approved. He is now available on bearpile.
Posted by EmmasBears at 2:47 PM