I'm not quite sure if I've complained about the weather here in 'Sunny Queensland' over the last few weeks or not... if not, I'll fill you all in now! The weather has been crap. And that's an understatement! The nightly weather reports show the forecast for the next 7 days - and it has been solid rain graphics for weeks now.

This week it was solid storm graphics, complete with the little bolts of lightning coming down from the cartoony grey clouds. I saw this, but dismissed it! The days had actually been quite nice for a change, and I managed to get some washing done. Then yesterday afternoon I got an emergency alert phone message explaining that severe hail storms were on their way. I went outside and the sky was clear, no clouds, soft wind blowing... for all intensive purposes a beautiful summer day. About an hour later I could hear soft rumbling noises in the background. The sky was still clear and bright, so I dismissed it as neighbourhood noise. 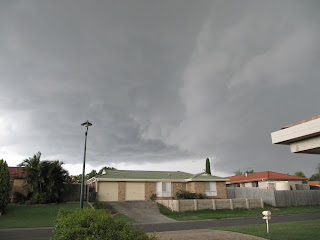 About half an hour after that, the sky changed colour. The air had that electric feel to it and the rumbling noise was louder. Chelsea and I went outside and sure enough some ominous looking clouds were heading over. I quickly grabbed the washing off the line and took some photos. This is looking from our side gate towards the neighbours house across the road. Within about 2mins of taking this photo Mark got home from work and the clouds opened. 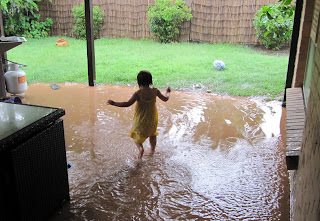 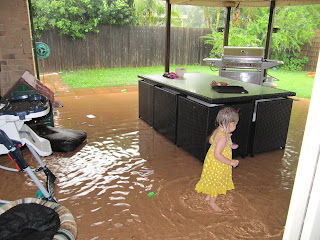 We had so much rain in such a short period of time that our back patio flooded (much to Chelsea's amusement, but not Olivers!). Oliver is a bit of a Princess dog and doesn't like loud noises or getting wet, so he took refuge inside, behind the couch! 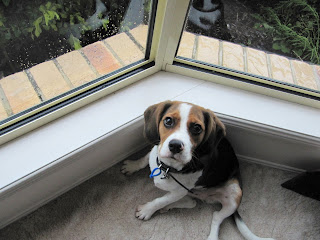 It was all over within half an hour or so, and we got lucky that the hail stones were only pebble sized. But it had obviously damaged the power lines somewhere, and we went without electricity from 5:30pm till 12pm. Right on dinner time! And Chelsea's bed time. So we all had a rather miserable night last night. And tempted as I was I decided not to try and finish my bear by candle light... goodness knows what he would have looked like by the light of day! :P So hopefully, if I can stop rambling on here, I can go do a bit more work on him tonight!
Posted by EmmasBears at 8:23 PM