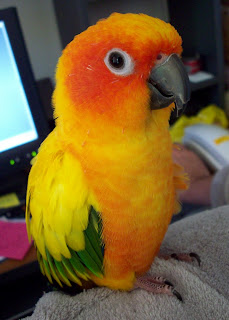 I've been having a bit of trouble getting to sleep lately, and last night got thinking about the pet parrot we had before Chelsea was born.

His name was Kojo and he was a beautiful Sun Conure. We purchased him in an irresponsible 'spare of the moment' decision one Sunday afternoon when visiting a pet shop. We had planned on buying a Cockatiel, but fell in love with Kojo's playful nature. Fortunately (or unfortunately, depending on how you look at it), he didn't make any noises in the pet shop. And being totally clueless about Sun Conure's, we didn't know what we were in for! 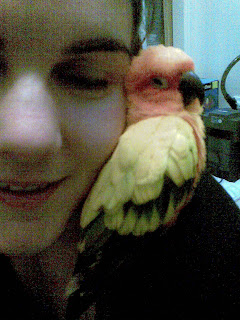 As a heads-up for anyone considering adopting a Sun Conure - they are LOUD!!!! And I don't just mean a little bit noisy, but easy to block out as background noise loud; I mean obtrusive, unavoidable, able-to-hear-from-the-road-when-the-bird-is-in-the-back-room-of-the-house kind of loud! 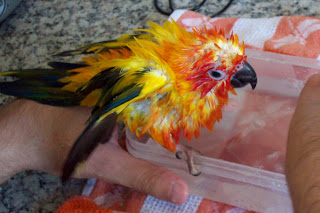 Kojo let off his first screeches once we got him safely into the house. Mark and I looked at each other and both said 'what have we done!?'.

I would say that it probably took a good 6 months for him to be comfortable with us, and for us to be comfortable with him. We got him to the stage where he was quiet as a mouse when just hanging with us. And if he was naughty he would get a time-out in his cage - in his own room! We let his wings grow back and he would fly from my shoulder to Mark's as he pleased. He was always so happy to see us when we got home from work. He would do his little happy dance and make soft grunty noises. When he was feeling really affectionate, he would nestle himself in the warm spot between my ear and my shoulder, pulling my hair around him like a blanket. I loved him so much! So much that even now, almost 2 years since we had to find him a new home, my heart hurts to think about him. 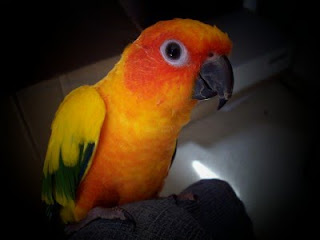 When we found out we were pregnant with Chelsea, we made the hard decision to find him a new home, sooner rather than later. I knew it would be hard, but I don't think I realised just how hard! I tried a million different scenarios in my head to see if there was some way we could keep him. But it just wasn't practical. Kojo was terribly bonded to me, and had gotten to the stage where he would attack Mark if Mark tried to give me a hug while Kojo was sitting on my shoulder. He would attack any of our guests as well, and actually drew blood on everyone who came to look at him to give him a new home! We knew that this behaviour, along with his volume level, would not work very well with a newborn in the house. 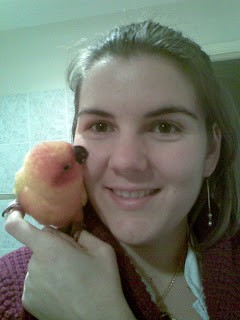 Watching Kojo get bundled into his new owner's car... his little claws clinging onto the bars of his cage, trying to get as close to where I was standing as possible, staring at me through the window as the guy drove away... It just about broke my heart. There was no way I could explain to him that I still loved him, but his new family would look after him now. I don't know how much intelligence to credit him with, but I couldn't help feeling like I'd betrayed him. I'd taken him home, gotten him attached to me, then tossed him out at the first chance. 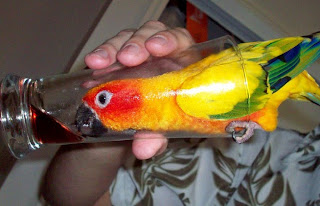 I cried for the rest of that day. I sobbed all through dinner. Cried myself to sleep. Cried at work the next day. And the day after that. (It probably didn't help that I was about 14 weeks pregnant either! :P). That sweet, annoying little bird had stolen his way into my heart, and going from the reaction I still have now when I think about him, he'll be there for a little longer yet... 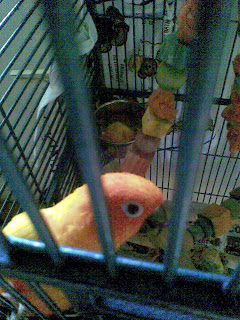 Posted by EmmasBears at 8:13 PM