July is birthday month at our place.

Oliver's birthday is the 4th July. Mine is the 18th July. Chelsea's is the 21st July and Mark's is the 30th July. Poor Byron is the only one not born this month.

But because of all the clustered birthdays we thought we'd do something special this year and purchased ticked to Cirque Du Solei. We got my Step-mum to babysit Byron especially, bundled up Chels and off we went to the (rather expensive) circus last friday. She lasted about 30sec before she starting thrashing around and kicking people in front of us and screaming like a banshee. In the end we got ushered into the 'sky room' right up the top of the entertainment centre it was being held in. But not even her own private viewing room was enough to pacify Chels. So we ended up leaving shortly after intermission. Needless to say, Mark and I were a bit annoyed.

Then Monday came, and it was my birthday. I actually had a good day despite waking up to a mountain of washing up, the dirty laundry basket overflowing and three dirty guinea pig cages! 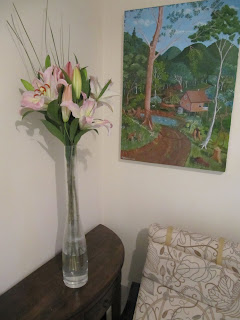 Mark bought me some awesome flowers and a WHOLE chocolate cheesecake. (I'm trying to loose weight - 12kg down in the last 4 months through Weight Watchers so far) - so this was an interesting birthday situation. Yummy, but not ideal! My mum had asked me what I wanted, and I explained that the only thing I really needed was more fur. So that's what she got me. I asked her to choose things she thought I wouldn't have chosen myself, to try and give me something a little different to work with. These are the three awesome pieces she picked out! 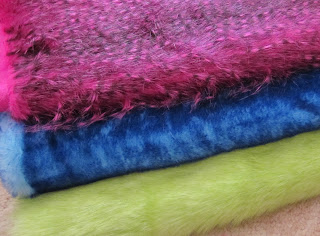 Then on wednesday it was a mad dash out to the shops to buy provisions for Chelsea's 2nd birthday and her party scheduled for today. I managed to juggle both crying children through the supermarket to collect colour matched table clothes, cups, cuttlery, party bags, food and ingredients. Got home. Fed the kids. Started on the rainbow jelly cake, and was maybe 5mins away from having them both in bed at the same time when I caught sight of Chelsea falling from her new trampoline head first. 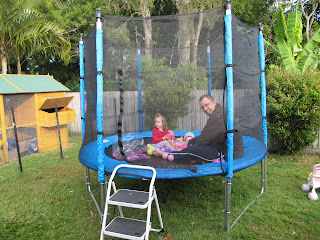 I ran outside and she was screaming. (which in itself isn't unusual for Chelsea!). But this scream was different. She was physically shaking and not holding herself properly. I figured out that she wasn't able to use her left arm. So after a couple of frantic phone calls to Mark to get him home to watch Byron so I could take Chelsea to the hospital, we were on our way.

Originally the doctors thought it was her elbow. So they got me to hold her arm out straight, palm side up for an x-ray while she screamed the place down. We quickly realised why when the x-ray showed she had actually broken her wrist. And the bone was misaligned. 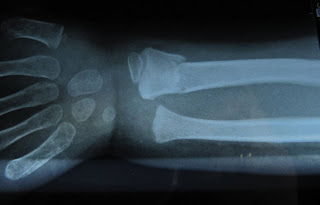 So they strapped her up, told me to give her some panadol and present to the children's hospital in the city the next morning. Which basically translated to a night of no sleep for Chelsea, me or Mark. I was literally going from feeding Byron, to cradling Chelsea in my arms while she whimpered 'hurt hurt' over and over. We all finally fell asleep at 3am this morning, only to have to be up again at 5am to head into the hospital.

They were great though. We'd seen the specialist by 7:30am, were up at theatre by 9:00am and in recovery by 10:00am. Home by 2pm. She then slept until 4pm when we were finally able to give her her presents and try and make the day feel a little more like her birthday.

It still felt like a crappy day though. I know she doesn't understand that today was any different to other days. But she loves everything to do with balloons, candles, singing happy birthday and unwrapping presents. I get really sad when I think about the day I had planned for her versus the day we actually experienced. 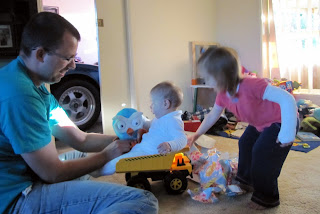 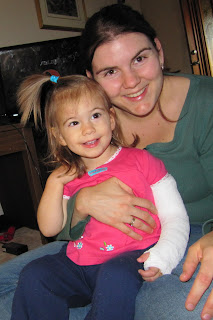 She's sleeping now, and seems reasonably comfortable (after a fight to get some pain relief medicine into her - resulting in sticky pink syrup spat out all over my face earlier). So I really hope we all sleep better tonight. You don't really realise how amazing a full night's sleep is until you haven't had one for the better part of 12months. And then you don't realise how good slightly broken sleep is until you don't sleep at all! :P
Posted by EmmasBears at 8:21 PM