I went to finish the last two spotty bears like Zaire yesterday, and realised I'd run out of 12mm eyes. The others I had in stock (8mm and 18mm were both terribly wrong!), so I made a quick order of some new supplies online and decided to work on a different bear until they arrived. Which, due to the fact that it's Friday today, won't be until after the weekend.

So I cut out the bears I had drawn on the back on my disastrously dyed wool fur. The bigger one has to sit in the 'waiting' pile with the spotty bears, cause he'll need 12mm eyes too, but the little one was fine to be assembled. 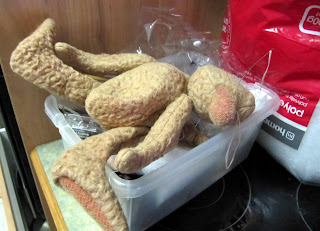 He's going to be old-style, and my plan is to cut back the pile in places to make the fur look worn as well as matted. It makes quite a dint in the shape though... I hope I can pull this off!!! 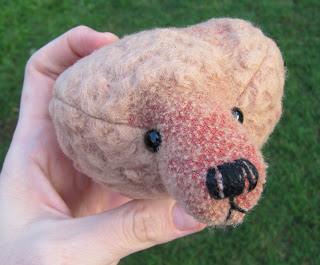 Posted by EmmasBears at 7:59 PM