Heather Blush, Sunny Rose and Pumpkin Spice (and the fall!) 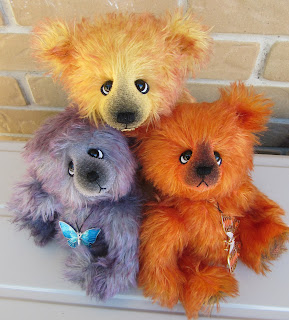 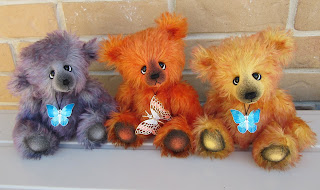 Meet Heather Blush, Sunny Rose and Pumpkin Spice - named after the amazing pieces of hand-dyed mohair they were made from. (Many thanks to Alison from eTeddies for the fur!)

All three were made with my 'Willa/Attila' pattern, but have been altered differently each time. Heather Blush has the gusset flipped around backwards. Sunny Rose (yellow bear) has her eyes set further back along her nose, and Pumpkin Spice (orange bear) has a much smaller face/nose/mouth.

It is pretty cool just how much variation can be achieved by changing such simple things as eye placement, fur direction, gusset shape and ear placement! 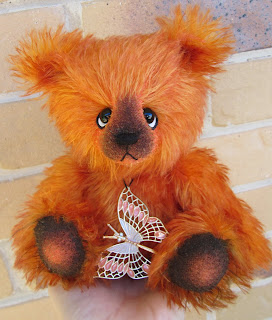 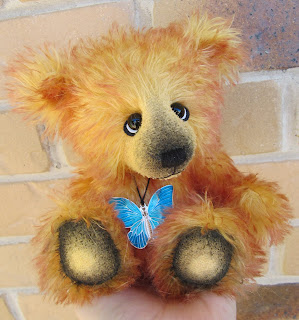 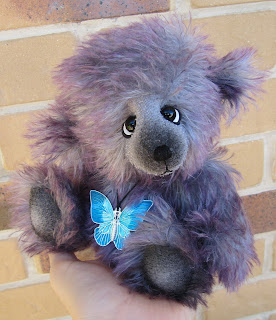 I had a bit of trouble getting these three finished as Byron and I had a little accident on Saturday morning. I was walking through a carpark with him in my arms when I felt myself loose balance. In that split second I thought 'I'll just right myself here, I won't fall down. I can't fall down, I've got Byron in my arms' - then I fell down.

I landed flat on the gravel, one shoe went in one direction, one in the other, and Byron landed about half a metre away. Once I got over the shock of finding myself on the ground, I quickly scooped him up. He'd curled himself into a ball on his back and was in the silent stage of a massive cry. Then he screamed and screamed and sobbed and screamed some more. I held him out to check his injuries and he had blood spotting all down the left side of his face.

I gathered my shoes and my bag and started walking the two streets to our local medical centre. I didn't want to put Byron through the trauma of being strapped into the car seat after being dropped!

The doctor checked him out, but he was fine. Then they realised I was injured too. They cleaned me up as much as they could, wrapped round some bandages and sent Byron and I off to the kids hospital in an ambulance so he could be monitored.

We spent the day there, but Byron was fine. After 6-7hrs of having to hold him constantly, not having anything to eat, and just my water bottle to drink I was well and truly ready to go home.

A friend (who happens to be a nurse) came round that evening and helped me clean myself up a bit, but she said I should probably have had stitches.

This morning things were not looking good for me. Byron on the other hand was healing up beautifully! We decided to make a trip to a different medical centre that promises 'rapid treatment'. We were there for about 3 hours, but most of that time was spent getting x-rays, having my rather deep and infected wounds scrubbed, cleaned, cut and stitched, and ended up with my right arm in a sling!

The sling lasted about 5mins before I took it off so I could carry Byron! It got really painful once the local anaesthetic wore off, but it's feeling quite good now. I still haven't looked to see how many stitches I ended up with, but I do know I had two yucky mangled holes in my elbow, a bruised hip and a gashed up knee!

Moral of the story - don't fall over! :P Kids seem to get away with falling over. Adults, not so much. Not that I planned to fall down! I'm still not sure how it happened to be honest. And I feel so bad that I hurt Byron too. I'm just so relieved that he escaped with only a little bit of damage!

This is him all tucked up in his daddy's arms this morning. The little cuts above his eye are already looking so much better! 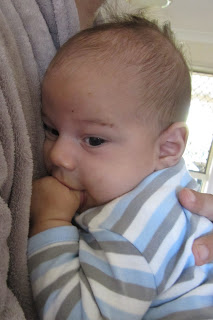