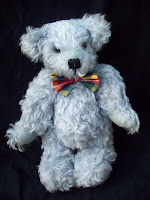 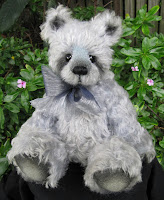 A little while ago... maybe six months or so... i discovered that there was some hostility towards bear reborning out there in internet-bear-making land. I was totally oblivious to it up until that point, and had already happily re-done a number of bears that needed a little TLC.

Some of the points raised in objection to reborning a bear were that you were messing with someone else's piece of art, that bears have souls and by changing it's look you destroy it's essence, that no artist could feel secure that their work would be kept as they intended it once it is sent into the world, that the reborner would try to take all the credit for the bear etc...

So, last night i managed to muster up enough courage to try making-over a little bear called Morris that had been waiting patiently for his turn at a new life. I have tried to address as many concerns about bear-reborning as I can in his bearpile.com listing, but i'm still not sure how he will be received.

I feel that I have given him a whole new lease on life, but I do understand that there will always be those who disagree with what I have done. And I accept that. What matters is that I feel I have done this as ethically as possible. I don't wish to claim that I am the greatest bearmaker on earth and all bears should be 'reborn' by me, but i do think that this little guy will now have a good chance at being cherished by a new owner.

Would love to know your thoughts. Positive and Negative.
Posted by EmmasBears at 9:18 PM