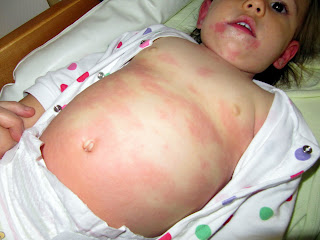 My poor baby has an allergy. Which is so odd, as neither Mark nor I have any allergies. Not my parents nor his. Nor our collective grandparents/extended family. So this has just come out of no where!

When she first started eating solids I was so careful to follow all the recommended guidelines. Introducing certain foods at certain ages. When she was getting close to 12months I started giving her little tastes of peanut butter - no problem. I assumed it was all fine.

Then a few weeks ago I purchased an all natural 100% roasted peanuts, peanut butter. I thought I was doing the 'healthy' thing. I gave Chels a bite the size of my thumbnail and her chin went all blotchy. I kept an eye on her, but it went down about half an hour later. I made a mental note to keep an eye on her after eating anything peanuty.

Yesterday, I was eating a muesli bar and without thinking gave her a bite. It had peanuts in it. Immediately she got all blotchy again. But it seems to subside after an hour or so. However, while I was bathing her I noticed her tummy and bottom were bright red and bumpy. Like hundreds of ant bites. I put some cream on her while I was dressing her. Gave her a bottle then went to check her nappy before putting her down for the night - she was COVERED in the rash!!! This was 5 hours after eating the muesli bar.

We took her to our local hospital and they gave her a drug to help ease the reaction. She was tired, and itchy, but handled everything beautifully! This morning you wouldn't even know it had happened!!!

I am just in a little bit of shock that she has this allergy. It just seems to have come from nowhere... Anyone else out there in blog-land had any similar reactions? I'm taking her to get fully checked out on Friday, so hopefully we should know soon if its just peanuts, or if there are more things we need to watch out for!
Posted by EmmasBears at 10:14 AM