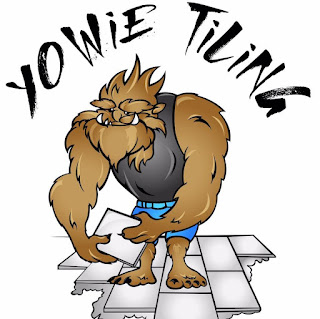 Towards start of the year we were asked by a local tiling company to make a soft sculpture version of their newly created logo - which is this handsome looking fellow above.

At that stage the wait time was around 6months for custom orders - and as September rolled around, so to did this custom request placement. 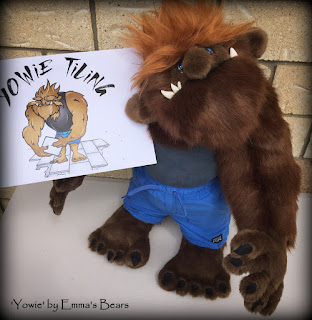 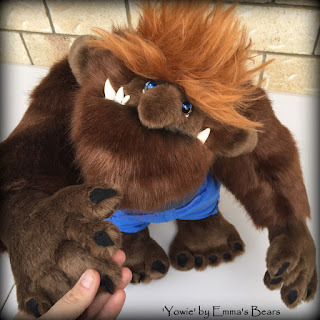 I will admit I was a little daunted by just how on earth I was going to get that 2D logo into a 3D soft sculpture piece. Pattern drawing has never been something that came naturally to me - I have no formal training in this at all. Everything I do is self taught. I REALLY have to think about how all the shapes will work together, and how a curve here will result in a bulge there. And trying to visualise how on earth I'd get that under-bite and beard shape to the face just about did me in! But I persevered (with a bit of manic muttering), played with some potential shapes. Discarded them. Played a bit more. Then finally settled on the pieces you see below. 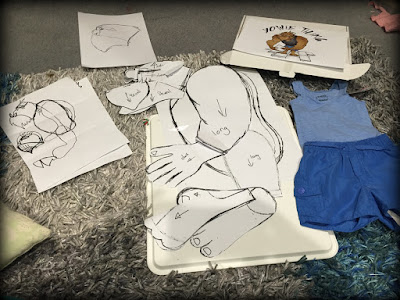 I was also trying to work size around the outfit he needed to wear (baby shorts and singlet to look like a tradie's outfit!), and to give me enough scope to be able to fit in all the finger/toe detailing. So he ended up quite a bit larger then I first envisioned!

The client and I had settled on this dark chestnut faux fur back when the order was placed - but I soon realised I'd need something a bit longer to create that wisp of hair on the top of his head, and something a bit shorter so you'd be able to see the hands and feet and not loose them in the dense pile. This photo below was my first imaginings of how everything might look. It's kind of cute, in a creepy why-the-hell-is-that-looking-at-me kind of way! 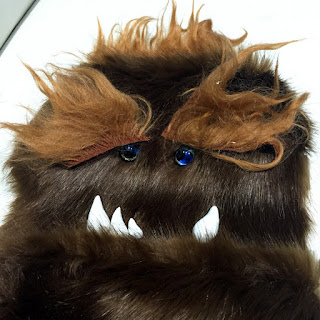 These were the eye choices I sent to the client as well. They went with the very cool, and very unique hand-made blue eyes. 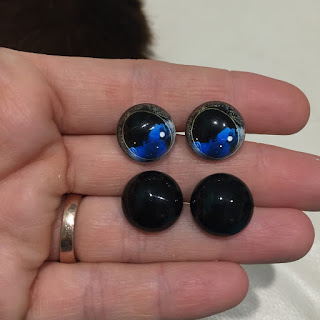 So once the pattern was drawn up, it was time for the mammoth task of drawing it all up and cutting it all out! Below you'll see the hands and feet with the black felt fingernails/claws. 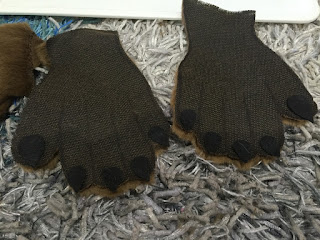 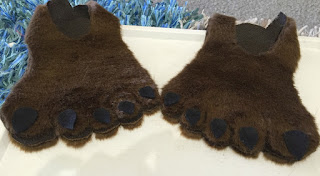 (Which we then had to sew onto each digit!) 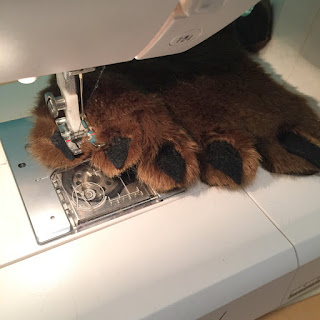 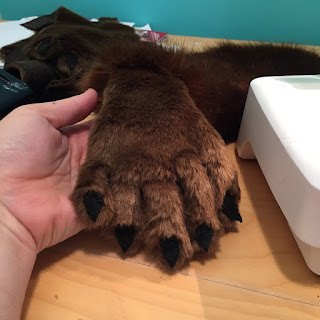 Oh the JOY when this first hand emerged! It was such a relief to see the idea starting to come to life. And to see that it actually looked like a yowie hand! 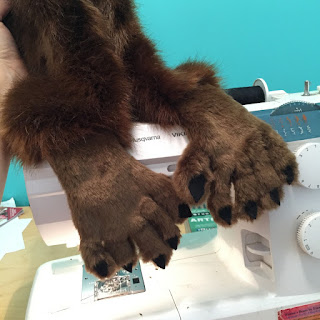 One very large yowie foot all ready to be turned right-side out. 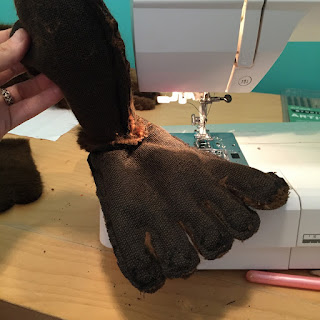 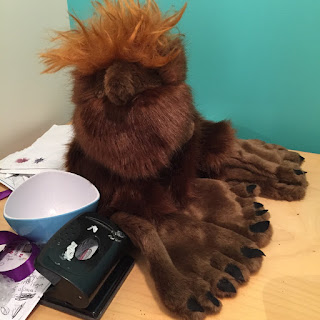 All of the yowie parts freshly sewn and turned and waiting to be brought to life. 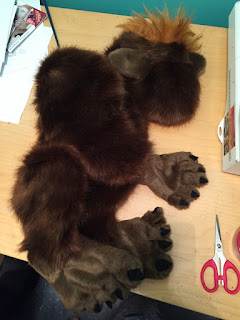 Sculpting yowie teeth. The logo showed him with two large teeth on either side of his under-bite, and then two smaller teeth on one side. So this is what we made for him :) 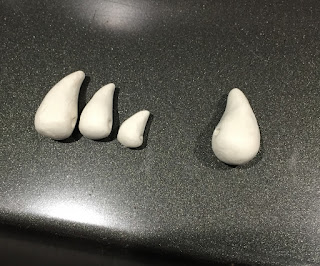 The head is starting to take shape!!! 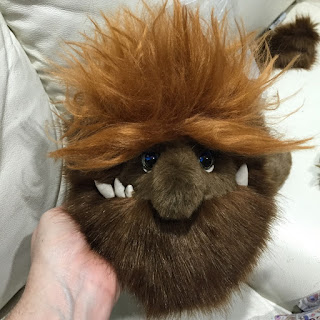 And then - low and behold (and after a LOT of stuffing!!!) - we had a finished Yowie!

He ended up standing in at 2' tall (approx 60cm), and was very chunky! We weighted his feet and made him hip joints quite firm so he can stand, took some photos of him in the garden, and then dressed him in his outfit (which ended up being quite a good  - if not slightly snug - fit for him).

Yowie was collected the same afternoon he was finished, and has been busy scaring his new owner's kids, as well as cruising around town in their work ute! ;) 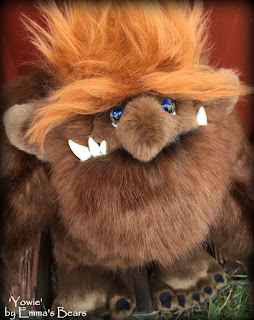 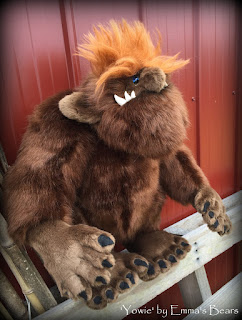 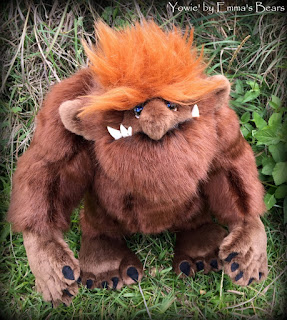 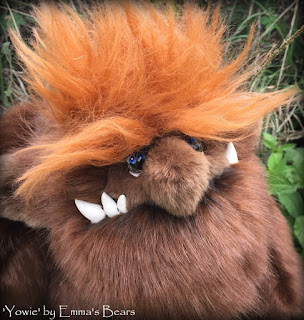 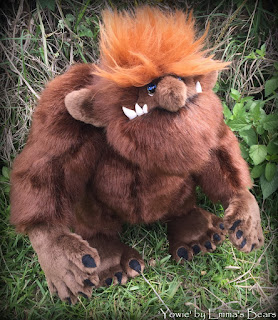 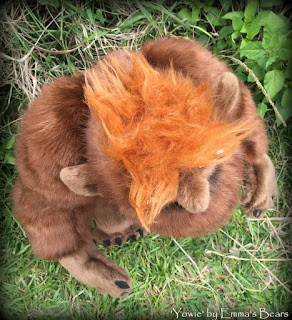 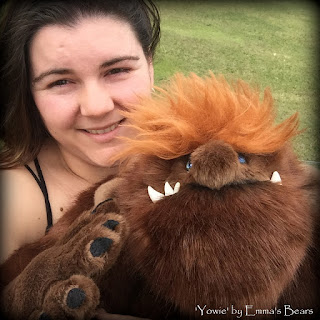 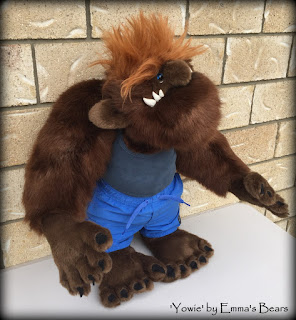 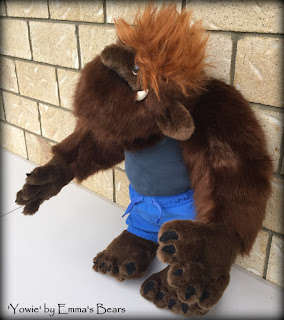 Posted by EmmasBears at 6:24 PM