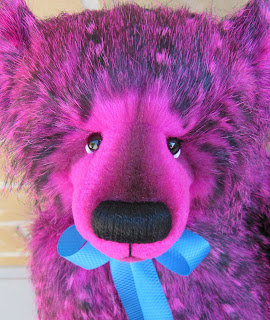 The second, and last of the two pink bears I was able to squeeze out of the piece of crazy fur mum gave me for my birthday back in July. 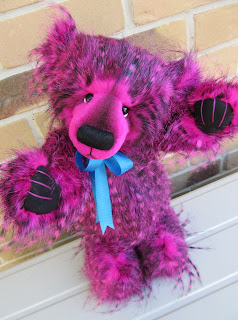 I did question whether or not a bright pink bear could actually be a 'he', but look at that little face. If that's not the most handsome little man than I must be getting a bit confused! Plus - he has a blue bow. That's all the masculinity he needs ;) 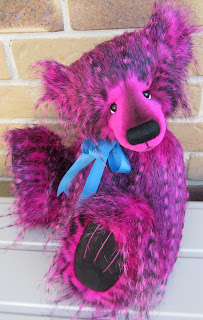 I actually finished him last night, but like to photograph my bears in the daylight. So first thing this morning (after breastfeeding Byron, cooking up porridge for all of us, trying to get more porridge into their tummies than the floor, having to clean 80% of the porridge from the floor/table/high chair/clothes, changing two very soggy nappies and soiled PJs, and then grabbing a quick shower myself), I finally got a chance to pop outside with Beres. Thankfully the weather was behaving for me, and we got some nice true-colour shots. He can be seen on my Available page now too.

This was my audience while I posed and snapped away. (Oh, and yes, Chelsea has a cast again. She'd had the previous pink cast off for about 2 weeks when she and Oliver were messing around on the trampoline and he knocked her off - quite badly breaking her arm this time. I knew immediately - her arm was in a zig-zag formation! She had snapped the top arm bone clean away from her elbow and has had to have wires put in it. She got the purple cast on yesterday after they checked that the wires were still in position. She's doing really well considering too. Such a little trouper!) 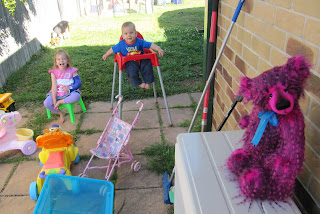 Posted by EmmasBears at 9:18 AM