After pouring a fair bit of love into the blue fox (from the last post), then not being 100% happy with the end result, I decided I needed to make a fantastic bear again. Just to recharge my confidence I suppose.

I decided to finish a big black and red synthetic bear that I cut out just before christmas last year. Fully intending to make him as a christmas themed bear 8 months ago, but running out of energy due to incubating a baby at the time! 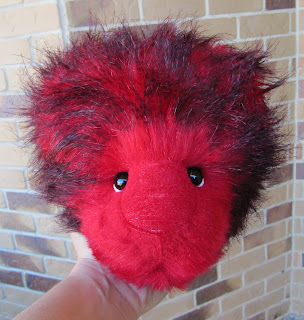 As I was sewing him, and had most of his little face looking back at me I knew he wasn't a christmas bear though - he was a valentines bear and he needed to be super cute. I wanted to scissor sculpt his face but am honestly not very good at it (which is why most of my bears have clean shaven muzzles!), so was a little anxious about choosing to use this technique on such a large head. This was at the stage just before the cheeks needed to be shaped and the nose embroidered.

I ended up partly shaping the cheeks. Embroidering the nose. Doing a bit more trimming. Adding the ears. Trimming the cheeks some more. Attaching the head. Stuffing the body and limbs. Yet more trimming/shaping. Closing the seams. Adding a necklace. Final trim. A bit of shading and finally happy! All of that took about 2 days. 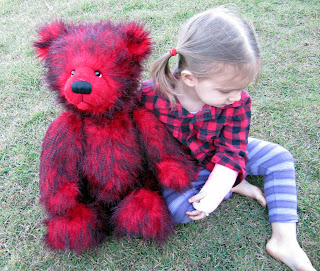 Part way through the process I took a couple of photos of the bear with Chelsea, and sitting in her pram to show his size. His head is actually bigger than hers! I looked back at these photos just after I'd shading his nose a few nights ago and really worried that I'd done the wrong thing. He looked really cute without the shading. 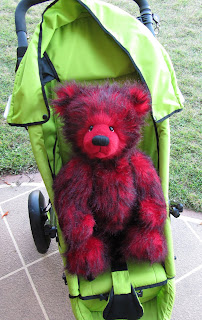 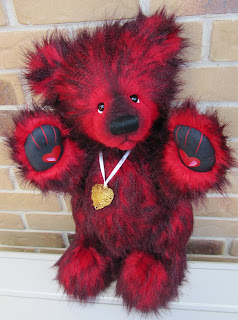 Looking at him all finished now though, I am glad I did it. It just gives him that little extra touch of character, and is kind of an inadvertent Emma's Bears signature. I wasn't sure what to call him and got a heap of awesome suggestions on my facebook page. But decided on Nova (short for Casanova) before I read the suggestions. I feel like I need to make another black and red bear just so I can use some of the brilliant suggested names now! 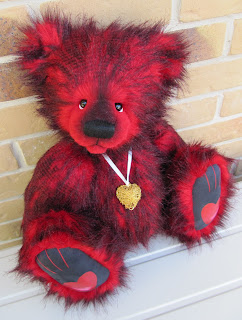 I have just cut out the pieces for a new and improved version of the blue fox stole from my last post, which just so happens to be red and black. Maybe I can steal a name suggestion for him!? I am so excited to get this red fox done. If he comes out half as awesome as he looked spread out on my living room floor this evening, then he is going to be hard to let go!

All in all, I'm really happy with Nova though. Which has meant that I'm pumped to give the fox stole another chance. I wonder if that works the same for other bear makers? Do you find that a less than perfect creation can put a bit of a dent in your confidence?
Posted by EmmasBears at 10:54 PM