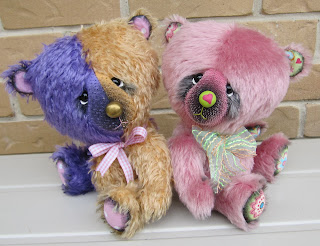 These two little cuties have been made especially to feature in an upcoming edition of Australian Bear Creations magazine as a project you can make at home. They have been made with the same pattern (my experimental bear Rosa), with Quinn simply having a two tone effect. I love how the head pattern allows for the two tone look to be completely symmetrical - right down the front and the back! 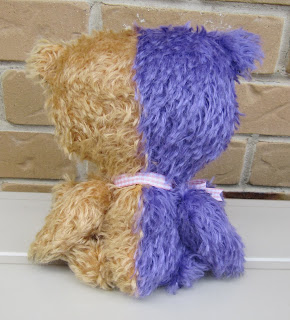 I hand sculpted their little ball-noses as well. Eden has a lime green nose with a pink heart to match her cotton-print inner ears and paws, while Quinn has a black nose with a dusting of the gold powder I used on Zac and Zaide. The powder works beautifully with the clay I use (Ozzle - the Australian version of polymer clay), and maintained it's shine even after baking. 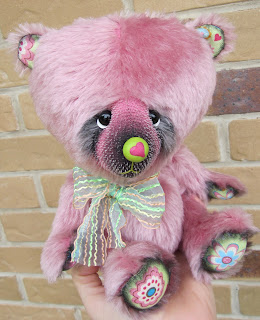 The challenge with these guys is getting the noses pulled in firmly enough that they don't move around. I don't know how many different threads I tried before I found one that didn't snap at the critical moment! In the end I just ended up using a good quality cotton, but threaded through the eye of the needle 5 times so that I had a 10-count strand. This proved to be strong enough for me to use all my strength on it. 10 strands was probably a bit of overkill, but I'd rather be sure then risk having a fragile nose. 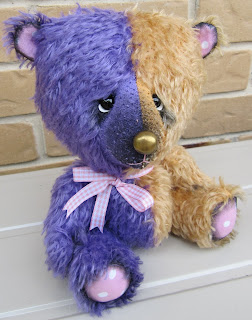 So, because these two are going to be sent into the magazine to be photographed, they won't be available right away... I'll make sure to let you know when I get them back! 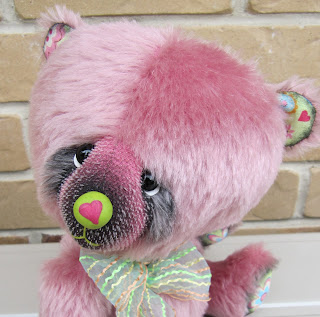 Posted by EmmasBears at 3:43 PM