I have been a little quiet in terms of blogging this week. But I have a very good reason. I'm busily working away on two massive custom bears - a Panda and a Polar. These guys are FAT!!! Both have taken up a full 1/2m of mohair each - which should give you some idea of how chunky their bits were! The request was for them to be cuddly and heavy, with a wobble head. They have been so much fun to stuff (one of the aspects I usually like the least!). 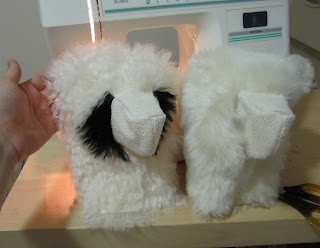 Here is a sneak peek at their heads just sewn up. I'm actually probably only a few hours away from finishing them now, and will pop up a few more final photos once I've sent them off to the collector for approval first.

So far my favourite is the Polar bear. I was working on her yesterday afternoon while Chelsea had a sleep and Mark was watching TV. I was muttering away to the bear saying how gorgeous he was when Mark looked up and asked me if I'd said something. I had to tell him that I was talking to the bear, not him! :P Poor guy!
Posted by EmmasBears at 12:12 PM