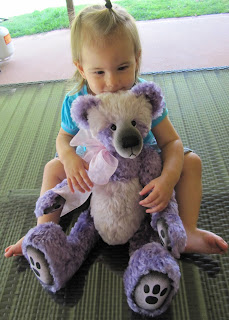 This is Abrialii - so named as this is a stunning variety of the lavender flower, matching the colouring on this big panda's belly and head. Abrialii is my latest bear, and is currently available. I must admit I'm a little smitten with her too! She's a lovely big girl, standing in at 22" (57cm) tall. I decided to get some photos of Chelsea with her too, to show just how big she is. At least this time Chelsea decided to cooperate! She was a little distracted by Oliver trying to jump up on the table too though. 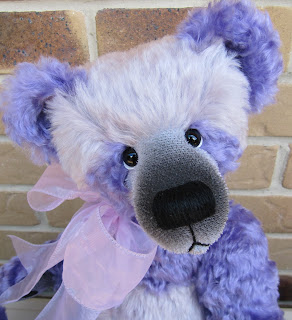 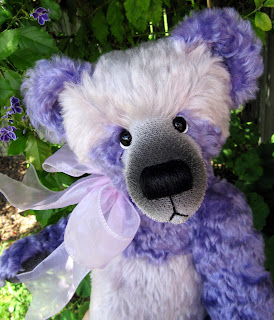 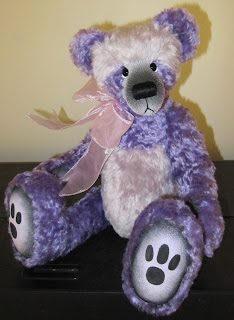 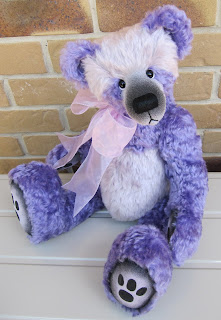 Which he is not supposed to be doing! We took him to the vet to get desexed yesterday. He was gone all day, and despite myself I actually missed him! It was nice to be able to get down in the garden and do some weeding without having to deal with him trying to sit in my lap at the same time, but the backyard just seemed a bit empty. Chelsea and I collected him yesterday afternoon, and we were given strict instructions not to let him run around or jump in case he opened up his stitches. That was basically impossible! He was so happy to be home that he was jumping all over the place. He did have a bit of a rest this morning though - and I managed to capture this pic of him, before he came bounding out of his kennel and jumping all over the place again! :P

Then, during Abrialii's photo shoot, he and Chelsea decided it would be a great idea to try and climb the ladder! I think she's a bad influence on him! At least she didn't get very high. And he just stayed at the bottom as a sort of 'look out' I suppose! I really don't know how we're supposed to keep him quiet for another 9 days!!! 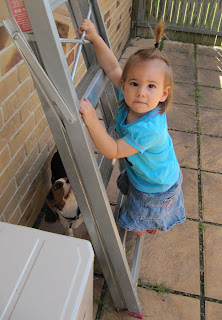